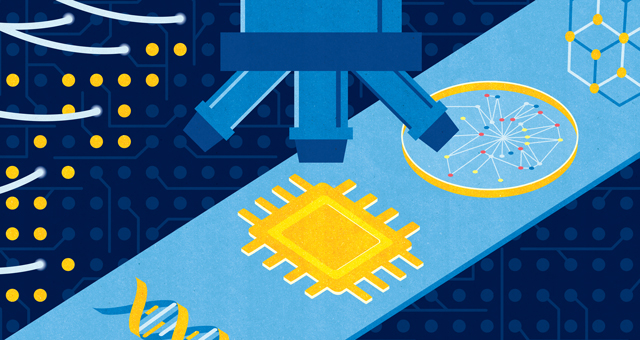 Four central themes were explored: the current gaps in industry, the spatio-temporal dynamics of biomolecules, single-cell analysis and systems pharmacology, the future of proteomics and finally the future of structural biology. Presenters reported on topics related to common drug targets, novel approaches for screening drug effects, approaches and tools for monitoring drug target dynamics and disease progression, and novel technologies with clinical utility.

Several factors which are currently limiting drug discovery were highlighted including the availability of tools for assessing spatial-temporal dynamics across different tissue types, the need for increased data sharing, the value in providing more detailed experimental conditions, the lack of a wellness signature and the use of models in the early discovery stage which do not accurately reflect the aspects of human disease. Developing a “healthy” baseline for all types of biomolecules would inform on alterations in disease which could in turn provide potential drug targets. The discussion identified several areas for further exploration. Could the aforementioned limitations account for the observation that currently most drugs fail due to efficacy rather than due to safety? Could the lack of investment in the biological understanding of disease, particularly complex diseases, also contribute to the drug efficacy failure? Would enhanced patient profiling lead to superior drug efficacy as some drugs will only demonstrate applicability in a very specific and limited population (e.g. the presence of a specific mutation)?

Valuable tools for discovering new drugs and monitoring response to therapies were presented and discussed: bioluminescence resonance energy transfer, which enables the study of the dynamics of real-time signaling in living cells, two-photon excited fluorescence, which enables visualisation of subcellular structures in living animal retina, picosecond IR laser which enables surgery precision at the single-cell level with no scar tissue formation, Volta phase plate, a method for phase contrast in transmission electron microscopy, electron paramagnetic resonance (EPR) and double electron-electron resonance (DEER), which are methods that measure the distance between spin labels and ultra-bright electron sources which allow the observation of atomic motions during chemical processes. Improvements to the current technologies including tools which enable their combination are expected to enhance drug discovery. Finally, a high-throughput assay of individual microbiomes to assess drug-microbiome interactions revealed that the response to different FDA-approved drugs differs among individuals and can cause drastic effects on the microbiome thus raising the question of whether new drug candidates should be screened for their effects on the microbiome.

The first session chaired by Michel Bouvier, CIFAR Senior Fellow, PI and CEO, Institute for Research in Immunology and Cancer, focused on current industry gaps and what is required to discover the next generation of drugs. The need to push the limits of existing technology and to create technology which is amenable to a larger community of researchers across different disciplines was highlighted. There is a need to explore and discuss how the scientific community can produce research which is more impactful for drug discovery. Building technology which can inform at the atomic level and creating molecular maps of the cell are approaches which can lead to improved drug design.

In order to understand the detailed biological changes occurring in disease, a standard “healthy” baseline is needed for all types of biomolecules. Understanding the detailed mechanisms by which healthy individuals progress to a disease state will provide valuable insight into potential drug targets. While there are copious amount of data for illness, a wellness signature is still lacking. Monitoring individuals over time prior to the onset of disease would enable the establishment of a wellness signature; analyzing human samples currently stored in tissue banks could aid in and establish this protein wellness signature.

Protein structure is crucial for drug discovery and by combining structural and computational biology, drug development can be improved (e.g. potency). Despite a wealth of data provided with the recent ‘omic’ revolution, additional high quality data is required for computational biologists to generate a complete picture. The importance of providing detailed experimental conditions (conditionality) was highlighted and could aid in addressing the limited ability to reproduce experimental results, known as the “reproducibility crisis”.  Publically sharing data in a meaningful manner which enables its interpretation across disciplines was also emphasized.  What repository infrastructure is needed to support meaningful data sharing requires further exploration?

Combining several layers of omic data including transcriptomic, genomic, lipidomics and proteomics could provide valuable insights on drug discovery and mechanisms of action; however, approaches in combining omic data is still lacking as are methods which enable meaningful correlation of data. Given that proteins are the ultimate biological functional unit, proteomic data is particularly useful in drug discovery. Currently transcriptomic data is relatively affordable although it is predicted that in the next 5 to 10 years to cost of proteomics will be comparable to that of transcriptomics

Systems Pharmacology: Towards Drug Development with the New Understanding of Cell Networks

Tools for assessing in vitro spatial temporal dynamics are lacking.

On a single-cell level the spatial orientation signature is not captured and is difficult to assess; with the exception of tools specifically for the eye wherein the individual response of rods and cones can be assessed and the same cells can be re-interrogated. When these dynamics are unaccounted for, the context of the environment is lost (e.g. adjacent cells). Do many drugs fail because the spatial temporal dynamics are not assessed? Would the development of effective tools for assessing spatial temporal dynamics which are compatible with various tissues improve drug discovery?

The majority of drugs are not failing for safety, but rather due to lack of efficacy.

Would greater investment in understanding the biology lead to increased drug discovery success?

Drug discovery is prominent for monogenic disease (e.g. cystic fibrosis) as the cause is known and a single target can be sought. In the case of complex disease (e.g. Schizophrenia) the detailed mechanisms remain unknown, impeding drug discovery. Again the lack of information on wellness limits our understanding of the biological alterations that occur in disease. Machine learning is also impeded by disease heterogeneity as it requires many consistent data points. The uniqueness of cancer imposes complications for machine learning.

For many diseases there are no animal models which fully recapitulate human disease and therefore there is an advocacy movement to proceed directly from preclinical safety in animals directly into Phase I.

SESSION 3:THE FUTURE OF PROTEOMICS

Approaching the Fundamental Space-Time Limits for Cell Imaging: A Technology Roadmap to Making a Molecular Map of the Cell

A New Platform for Screening Compounds against Individual Microbiomes.

INSIGHTS FROM GROUP DISCUSSION ON THE FUTURE OF PROTEOMICS

Should microbiome safety be required for drugs discovery?

Given that the microbiome response to different FDA drugs differs among individuals, should new drug candidates be required to undergo microbiome safety testing? Should drugs also be classified according to their effects on the microbiome? After exposure to antibiotics, some microbiomes are unable to recover and initial findings have demonstrated that certain FDA-approved drugs which are not classified as antibiotics can have antibiotic-like consequences on the microbiome. If this testing were to be implemented for drug discovery, the establishment of a “healthy” microbiome would be required.

PIRL is expected to cause no damage to the epithelial layer of the cornea as it has been introduced into the eye multiple times and demonstrated no scar tissue. Therefore PIRL may be of potential use for the treatment of cataracts as the current therapeutic method entails the use of a pick, the delivery of shock waves with aspiration which then leads to cornea damage. PIRL may also be amenable for liver biopsies and drug delivery. Could this technology be applicable for metastasis? Given that metastasis is inoperable is there value in removing metastasized tumours? Notably viruses can enter the gas phase when using the technology and thus is now classified as a biohazard; the Tobacco mosaic virus was able to infect a leaf.

Approaches to High -Throughput Structure Analysis and Imaging in Solution

INSIGHTS FROM GROUP DISCUSSION ON THE FUTURE OF STRUCTURAL BIOLOGY

Cryo-EM is a valuable tool for studying biological structures and further improvements of the technology and by combining with other technologies will further improve drug discovery.  Although improved software and detectors can improve upon the current cryo-EM technology, sample preparation is a limiting factor. Samples must be homogenous and this aspect must be taken into account when relating the results back to biology. To gain a comprehensive picture of drug interaction static pictures are not sufficient. Capturing movies would aid in assessing whether a drug reaches and binds its target.